Yes, friends, it's Friday yet again... February is winding to a close, March is roaring in like a lion, and there's a bear wandering around Monrovia, California. If there's other news, I'm of a mind to ignore it today and instead proceed directly to ORIGINAL ART FRIDAY, documenting my exciting adventures in having a lot of original art strewn around.

Today, I go back to more genius from the brilliant RUSS HEATH, with this page from Our Army At War #243, from 1972. Here, Sgt. Rock makes a perilous approach toward a farmhouse. Tragically, his pursuit of information results in someone losing their dagger in the back of the poor guy Rock's slappin' around. Heath's mastery of the human figure and his pristine inking makes for another lovely, dramatic page.


When someone tries to tell me that comics are movies on paper, this is the sort of page that proves there are substantial differences. In a film, Rock's attack on the guy, the knife, then the creep-up on the farmhouse would all be told in continuous motion. (Unless Michael Bay is directing, in which case it would be done in fifty pointless cuts and tracked with Motley Crue music.) Here, Heath is choosing the high-points of each action, and in my opinion throws down even more drama by picking those moments.

My only caveat for this page: the lettering decision in the panel on the bottom lower left. The decision to attempt to break "I wasn't flippin'!" from the other dialogue within the same balloon is just confusing. And maybe Heath inked in the balloons before the lettering was added, but there's a lot of empty space at the bottom of the dialogue in almost ALL of the panels. What up with that?! John Constanza's lettering is usually flawless so I'm bamboozled...

But it doesn't prevent me for admiring another piece of Heath greatness. And pulling myself off bear watch long enough to share it with the world! 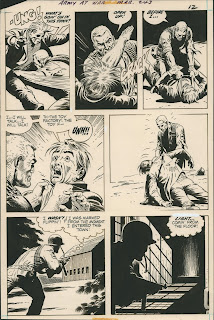 Posted by Mark Verheiden at 9:00 AM