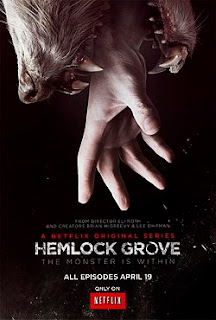 A handy compilation of trailers put together by Aaron Douglas, who plays Sheriff Sworn on Hemlock and the legendary Chief on Battlestar Galactica...

Hemlock Grove,  April 19, only on Netflix.

Posted by Mark Verheiden at 9:50 AM No comments:

So some really severe elderly folks at CPAC are outraged that Rob Portman has endorsed same sex rights after discovering his son is gay.  That's to be expected.  But when did cosplay become a thing among the conservative crowd?

A veteran record (as in vinyl records) collector finally gives up the ghost...

I dumped most of my vinyl collection -- at least 2 or 3 thousand discs -- five or six years ago.  Lack of space X convenience of CDs + cost of storage room to house all that stuff = bye bye.  I did keep most of my singles and a few of my fave platters, but otherwise my collection is hopefully entertaining the swingin' hipsters who found them in Amoeba L.A.'s used-vinyl area...

Where I would disagree with the writer is his comment about not finding much difference between an MP3 and a vinyl record.  After too many concerts and lengthy drives with the car system cranked to 11, my hearing ain't what it used to be, but I can still tell the difference between a thin, tinny MP3 and, well, non-MP3 playbacks.  What worries me (and worries audiophiles way more) is that an entire generation has grown up with the thin MP3 sound and have become culturally adjusted to that  sound quality.  The fat bass and richer horns and deeper vocals that come from a fully realized recording may actually be negatives for those folks...

BTW, I still buy a (very few) vinyl records, but less for the record than the graphics. One thing we have lost in our i-tunes/spotify/whatever else age are the amazing covers and liner notes that graced many seminal LPs.  Strictly as art, there are some mighty impressive pieces out there.  As music, I'm happy with the CD or lossless version...
Posted by Mark Verheiden at 8:28 AM No comments:

Just announced, there will be a Hemlock Grove panel at WonderCon this year, 6:30PM on Friday March 29.  Here's the official blurb:

And other executive producer me.  Come on down!

Posted by Mark Verheiden at 11:17 AM No comments:

I picked up the Kindle version of the book "John Carter and the Gods Of Hollywood" because the reviews were effusive and I like your basic exploration of why bad things happen to good movies as much as the next guy.  JC and the Gods is a scary thorough examination of the machine that produced and then attempted to promote the recent John Carter movie.  The gist of the author's thesis is that the movie both fell through the cracks during a regime change at Disney and/or was intentionally or unintentionally sabotaged on the publicity side by folks who just didn't get it. Per the author, movies like The Avengers were drawing up enormous media oxygen while John Carter simply wasn't getting the same level of attention.  According to the writer, it was basically the endless missteps in the promotional campaign for Carter that led to a less than stellar opening and big box-office trouble.

I should mention that I hadn't actually seen the movie itself before I started reading the book.  After learning about all the missteps on the Disney side, I finally got around to a sit down with the movie itself.  And guess what?  It's just not very good.  Obviously everyone involved tried to make a great, epic, sprawling fantasy out of a classic piece of Edgar Rice Burroughs adventure -- but in the end the magic just wasn't there. And sometimes that just happens.

On a much smaller scale, I've become gunshy these days when folks tell me that one of my TV scripts is bound to be "the best of the season," because it seems like those are inevitably the episodes  where another shoe drops and they become the problem child.  It's not that anyone sets out to do a lousy job -- and I really don't like the snarky piling-on that occurs when a John Carter comes along -- it's just that sometimes things just don't work out.  It's not great for Disney stockholders or fans hoping for the further adventures of John Carter, but not a diabolical crime either...
Posted by Mark Verheiden at 7:09 AM No comments:

Want to see a 12 year old kid named Caspian Coberly play Red House on guitar in the style of Jimi Hendrix? The video is here...

Want to see me trying to learn a chord?  I didn't think so...
Posted by Mark Verheiden at 4:57 PM No comments:

Hemlock Grove Is Screaming to Stream!

Years in the writing, months in the producing, and now it's just weeks before Hemlock Grove debuts on Netflix.  April 19, to be exact.  Members of the cast and crew, including yours truly, will be discussing the evolution of the show at an upcoming fan event that will be announced "soon" -- but meanwhile, here's the poster:

What exactly is Hemlock Grove?  Well, despite the poster image, is it not a 13 episode treatise on the hazards of hand-feeding your pet wolf.  It IS, in fact, a suspenseful thriller about a small Pennsylvania town plagued by multiple murders, and the unlikely friendship that develops between two "opposite sides of the tracks" high school boys investigating the crime(s).  More to come as we close in on the release date.  April 19!  All episodes at once!
Posted by Mark Verheiden at 8:24 AM No comments:

AMERICAN COMIC BOOK CHRONICLES: THE 1960's, 1960-1964:  From the fine folks at TwoMorrows press, this is the first in what I hope is a lengthy series of volumes exploring the wild and wooly history o' comics. Written by comics historian (and fellow Capa-Alpha * member) John Wells and generously illustrated with hundreds of full color images, this edition explores an especially cool moment in comics history.  If not precisely the birth of the silver age (most folks say that started when the new Flash debuted in 1956), then it was certainly the birth of the Marvel age of comics, with the debut of the Fantastic Four, Spider-Man, the Hulk, the rebirth of Captain America, Thor, etc., etc., etc. But there were all sort of other comics available in those days, from a panoply of publishers long gone.  ACG, Gold Key, Charlton, Dell, Harvey and more.  John's written a conversational and comprehensive history here and TwoMorrows has given the book the deluxe treatment.  Well worth checking out.

MESSAGES IN A BOTTLE - COMIC BOOK STORIES BY B. KRIGSTEIN: 240 full color pages of exquisite work by Mr. Krigstein, one of the finest artists to ever grace the world of comics. Delicate pen work and incredibly lay-outs abound in this comprehensive volume that includes his best EC stories.  Anybody who believes today's comics are as good as it gets needs to give this a look.   And look Ma -- not a superhero in the whole bunch.

MARVEL FIRST - WWII SUPERHEROES: 450 pages of full color Golden Age "origin stories", from superstars like the Human Torch, Sub-Mariner and Captain America to obscurities like "The Fin" and "Rockman", this is a raw injection of 40's comics madness.  Up until the 80s, I think these type of stories are what most of the public had in mind when someone said "comic book."  Crazy heroes, primitive but often exciting artwork, and stories that have fever-dream logic when they have any logic at all.

COLLECTED COMICS FONDLING/Dark Horse Presents 1986-2000: A print-to-order publication, I picked this up because it promised to index all 157 issues of Dark Horse's flagship title (+annuals).  Which it does.  But there are also reviews.  And I didn't make it past page one, where there was this gem re: Dark Horse Presents #2: "Wow, does (Concrete creator Paul) Chadwick ever try hard to be cute. His Concrete story this issue is completely useless, inconsequential diversion... Maybe I'm missing the point." Well, yes, you are.  Anyone who can't see the artistry and charm in my pal Paul's Concrete stories is a hopeless case, and yes, I am biased.  Oh well.

* Capa-Alpha is a comics-related amateur press alliance that was formed in the early 60's and continues to this day.  Members write and publish fanzines that are gathered each month by a Central Mailer, who distributes the collection to members.  I've been publishing my own apa-zine for Capa-Alpha off and on since 1971...
Posted by Mark Verheiden at 11:32 AM No comments: