1968 was such a great year for comics, and especially for a Marvel Comics fan. This was the year when something changed, distribution-wise, for Marvel, allowing them to launch a spate of new titles spinning out of their "two-fer" books. Tales of Suspense spit out Captain America and Iron Man titles, Strange Tales gave us Nick Fury, Agent of SHIELD and Doctor Strange, and Tales to Astonish split into The Incredible Hulk and Sub-Mariner books.

I loved them all through thick and thin, through good stories and... LESS good stories. I was dazzled by Jack Kirby's Captain America run, Jim Steranko's revolutionary SHIELD, Herb Trimpe's Hulk and finally, later in the series, Bill Everett's last stand on Sub-Mariner.

Subby was created by Everett back in 1939, and his art and story made the character something special from the start. When superheroes took a rest in the late 40's, Subby was one of the few to make a short-lived come-back in the 50's, again with Everett at the helm. For the book's solo '60's-70's run there were many fabulous artists, from Gene Colan to John Buscema to Gil Kane, but when Everett himself came back with issue #50, things took a definite turn toward the really great.

Much of this run has just been reprinted in Marvel's long running "Marvel Masterworks" series, Volume 227 (!, and yes, I have them all!). It's hard to describe what makes these so special, but there's a lightness and wide-eyed enthusiasm to Everett's art that was different from the house Marvel style and yet perfect for Sub-Mariner. Roy Thomas's introduction tells the story of Everett's return, sadly cut short by Everett's health problems...

The BW image taken from the original art below is just a hint of Everett's style. It's really great that this material is back in print, in easy to find form. Check it out! 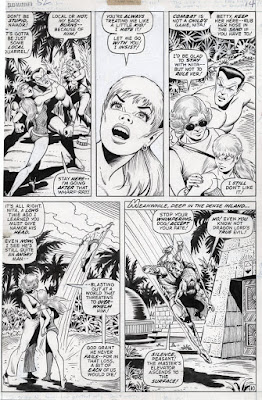 Posted by Mark Verheiden at 2:31 PM No comments:

Bone Tomahawk! See It BEFORE Dinner!

Anyway, hey, back to it! BONE TOMAHAWK! If you see just one Kurt Russell western this year, may I humbly suggest you make it this one. Actually, feel free to see Hateful Eight too -- I'd like it to succeed so maybe the door opens to even more westerns, and it ain't bad -- but Bone Tomahawk is superior in every way.

The plot is simple. The wife of a local cowboy is kidnapped by marauding "troglodytes" (yep, that's what they call them) and Kurt and his intrepid associates head out to find her and bring her back. Suffice to say there are some encounters along with way with varied and sundry, and then things take a very surprising turn. The less said about the "turn" the better, though if you watch a preview it's pretty clear this is an uncompromising horror western and not a straight ahead oater.

What makes this one stand out are the great performances by Russell, Richard Jenkins, Patrick Wilson, Matthew Fox, Lili Simmons, Sid Haig (!) and David Arquette, who are speaking dazzlingly witty and gritty dialogue by writer/director S. Craig Zahler. This movie got my vote in the WGA awards for best screenplay -- it's really that good. Richard Jenkins especially stands out, taking what could have been a stereotypical "Chester" role (is that reference too old? Gunsmoke? Longest running Western in TV history? Anyone? Anyone?) and fleshing it out into a full blown, emotional character.

Then there's the ending. I didn't know anything about the movie going in except "Western", so the conclusion caught me off guard. It's strong stuff but works.

If you have a chance to see the blu-ray version, there is a deleted scene that I found delightful, though I can see why it was cut. I'll say no more. The "Making of" is also interesting, revealing (among other things) that the movie was shot in 21 speedy days on locations only 40 or so miles outside Los Angeles.

It's gets the full MV "Check it out!"


Posted by Mark Verheiden at 12:05 PM No comments: