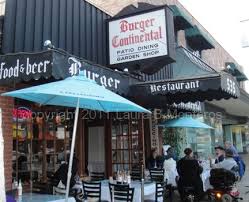 I had occasion to pass through my old stomping grounds of Pasadena, CA. recently and drove past the location of an old fave restaurant, Burger Continental. The elegant signage was still there, but the ominous "Farewell" poster over the door (which I only caught on the fly, driving past) suggested the B.C. was no more.

When I first moved to Los Angeles, I took up residence in an area called Highland Park (basically between downtown L.A. and Pasadena), where I lived in rather seedy apartment complex called "The Golden Palms." The G.P. (we used initials for everything back then!) had become a low-price hangout for students attending the nearby Art Center for Design. I came in toward the end of that era, and while I was not a student at Art Center, my reasons to be there were similar to the starving students, i.e., I had no money and the place was cheap.

Actually, it was even cheaper than it should have been. The building was under rent control, which meant rents could only be raised a set amount on current tenants. If a tenant moved out, the new tenant could be charged whatever the landlord liked. But somehow the residents remained remarkably stable during my time at the G.P., as in, my apartment was actually listed under another name. You would think that would raise an eyebrow from the owner, but turns out he was an absentee landlord named "Mr. Tung" (I'm not kidding) who didn't seem to care who handed him cash every month, as long as he got it. Mr. Tung used to walk the corridors of the building with a bag that literally had a dollar sign on it, like the Monopoly guy, collecting rents. Given this was a fairly gang ridden area, I was always surprised at his bravery, but as long as he didn't raise questions, que sara sara.

Anyway, groups of us would occasionally pile into a car and head over to the B.C. for Greek food (I know, "burger" continental, but what can I tell you) and beers. It was a friendly, open air place as I recall, and we spent many an evening arguing over art and love and God only knows what else after downing ten beers with our falafal.

But my fondest (sort of) memory of the B.C. came when I suffered a romantic set-back in my life and was really, really, REALLY down. My neighbors, who hadn't known me that long, nevertheless could see I was a mess. Maybe it was when they saw me staggering teary-eyed toward my apartment with a 12 pack of beer and a bottle of Jack Daniels. Anyway, out of the kindness of their hearts, they dragged me out to the B.C. so I wouldn't be alone. Those neighbors, as I recall (and things were a little foggy that night!) were James Gurney (yes, THAT James Gurney, the guy who later created Dinotopia) and Thomas Kinkade (yes, THAT Thomas Kinkade, later known as the "painter of light").

Much life has gone by since that evening, and Thomas himself passed away four years ago under unsettling circumstances, but that night was a moment of compassion that has stuck with me all these years. And it all happened at the Burger Continental...

By the way, when I got in front of the computer I decided to check see what exactly had happened to the restaurant. Well, hmm... turns out sanitary conditions had taken a turn for the worse, and after numerous warnings that evidently went unheeded, the place was shut down by the health department in 2015. An ignominious end, but so it goes...
Posted by Mark Verheiden at 4:43 PM 1 comment:

With the advent of DVRs and DVDs and streaming and soon, direct-to-brain interfaces, it's easier than ever to pull up your favorite film or TV show. And with this ease of viewing, I find myself strangely drawn toward certain sequences that strike a chord. Whether it's a great performance, an especially riveting piece of dialogue or just a sweet turn of events, I find myself watching certain scenes again and again, trying to understand what it is that's drawing me in, and how the writers, filmmakers and actors pulled it off.

Here's one, and by the way, MASSIVE SPOILERS are involved:

"John Grisham's The Rainmaker." Aside from kind of loving the fact that novelist Grisham has his name in the friggin' title of a Francis Ford Coppola directed picture, there is a lot to like about this legal thriller. Matt Damon plays an idealistic young lawyer who goes to work for a shady but honest legal firm, and immediately finds himself suing a big medical insurance firm for denying benefits to a cancer victim. The case of course ends up in court, where Damon, assisted by an excellent Danny Devito, tackles a smarmy corporate lawyer played by Jon Voight and, as the CEO of the crooked medical firm, an exquisitely creepy Roy Scheider.

My favorite sequence: after Judge Danny Glover slaps down Damon by refusing to admit some stolen documents, blowing Damon's case out of the water, Devito gets some legal advice from his mentor (and sleaze-ball) Mickey Roarke and gets the evidence reintroduced. After suffering through several smarmy put-downs from Voight's opposing counsel, Damon, with Scheider on the stand, systematically dismantles the entire crooked operation. Watching Scheider, at first supremely confident, squirm with irritation as he's forced to admit wrong-doing, is sweet. But the key moment comes when his testimony wraps. Scheider walks from the witness stand carrying an especially damning piece of evidence and with imperial disdain tosses it onto Voight's desk, summing up their relationship, his attitude toward the proceedings and Voight's total humiliation.

It is an exquisitely directed scene full of details that draw me back in time and again. Scheider wears a rather ridiculous blue sweater, clearly an attempt to humanize him with the jury. When Devito comes around the defense table to present some documents, he trips over his own briefcase but manages a perfect "I meant to do that" recovery.  Danny Glover's Judge, who refuses to allow his personal views to cloud his decisions from the bench, nevertheless takes some pleasure from Damon handing Voight's character his proverbial ass. And when the verdict finally comes down, there is an excruciatingly powerful moment when the father of the now-dead cancer victim approaches Scheider with a photo of his dead son, forcing him to look.

More classic scenes to come as the mood strikes...
Posted by Mark Verheiden at 8:23 AM No comments: 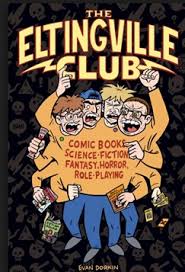 Maybe it's my general sourpuss nature, but it takes a lot to get me to laugh out loud these days... yet this book did the trick. A collection of (I think) every story that writer/artist Evan Dorkin concocted starring the Eltingville crew, if you have even a passing familiarity with comics fandom or simply obsessed individuals in general, this will strike a chord.

So who are these Eltingville fellows? Essentially a composite of every overblown fannish stereotype, taken to 11 and then some. These guys make Sheldon on Big Bang Theory look like the soul of normalcy. In the most insane (and funniest) story, one of the four members is put in charge of the Club's comic-shop haven while the grotesque owner is off scoring (stealing) toys from the back room of a local Toys-R-Us. Power goes to the lad's head, and soon the members are beating one another senseless with expensive custom toys ("Thorr's" Hammer with special misspelling versus what looks like a real pair of Hulk hands). It's the gas station scene from Mad Mad Mad Mad World (see that too!) taken to a comic shop extreme, though unlike the bloodless Mad World sequence, Dorkin lovingly depicts his fan archetypes literally getting their teeth knocked out.

Dorkin's decided to end this series one and for all, so this collection is "it" and well worth the $$.

For a better explanation of the genesis of the Club, here's a 2015 interview with writer/artist Evan Dorkin...