I saw the band Fear in Portland Oregon in 1979.  The best part of the experience was arriving way too early for the show and sitting next to lead singer Lee Ving at the bar before the performance.  Meaning me and my buddy Stan actually "had a beer with Fear."  I wish I had some miserable experience to report, but Lee was actually a nice guy and seemed to enjoy blabbing to two enthralled Oregon kids.

It was an amazing show.  Fear in their prime = AMAZING.

For some reason I've been obsessing recently over an old toy called "Crashmobile."  I guess it's a sign of getting older or dementia or who knows what, but I remember buying several of these as a kid and having no end of fun smashing them into the wall and watching them explode.  So now it's all about finding one (or two or three) of them again to relive what was probably a less exciting childhood adventure than memory allows.

They were called Crashmobiles because that's exactly what they did.  There were several models in different sizes, but the design was more or less the same across the CM spectrum.  You would squeeze the sides and roof of the car together over a springy-lever connected to the front bumper of the car.  Roll the car forward, bonk the bumper, and KAPOW.  The lever would be triggered and the thing would burst apart, usually while the child operator was making horrific screaming noises ("aghh, gahh, my legs are broken, I've been decapitated, aghhh, agghh!!!).  Then you would carefully gather the parts, rebuild it and repeat.  Until the car broke for real (something that usually happened really fast) and you had to steal 20 cents from your Dad's sock drawer (sorry Dad) and run to the supermarket for another.

But you have to admit.  There's something genius about selling a toy that's MEANT to be broken.

What the image below doesn't really sell is just how tiny the Crashmobile Jr. really was. Like, three inches long and maybe an inch across.  Also, this image is from later in the life of CM Jr., which was a mere 19 cents when first unveiling.  And finally, someone must have stored this one in their dirt closet, because fresh Crashmobiles weren't usually this dusty.

Anyway, crashmobiles.  What can I tell you.  As a child I was easily amused... 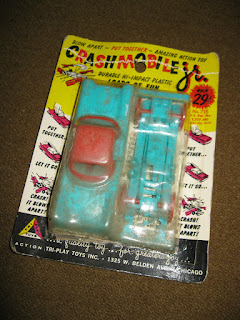 I will fully admit to reading the occasionally human interest/gossip piece online.  There sure are a lot of celebrities/politicians/etc. doing a lot of interesting/odd/scandalous stuff. But it's the reader comments that always bring me up short.  Today, to pick a piece at random, there was a story about actress Maya Rudolph being pregnant with her fourth child. That was it... married actress is having another kid. Seems innocuous enough, until you get to the comments. For instance this (of course anonymous) gem, among the first few:

"Another worthless HuffPost piece. No one cares that Maya can't keep her legs crossed."

Can't keep her legs crossed?  Are we now at a place where married sex that leads to pregnancy is considered "dirty?"  If all women "kept their legs crossed" there would be no human race, though (silver lining!) there would also be no bizarre internet trolls posting pointlessly ugly comments about something that's actually kind of sweet.  But the hits just keep on coming...

"What did Maya's left leg say to her right leg? Nothing! They've never met!"

"Is this one of those Hollywood freaks that supports abortion? I wonder if she believes her fetus is alive yet?"


"Ugly people have ugly kids... won't someone stop Maya Rudolph from reproducing? She looks like someone took a dump on her face"
Remember, all this for a nothing news blip about an (sorry, commenter #4!) attractive actress getting pregnant for the fourth time with her husband.  No scandal, just someone havin' babies.

I draw few conclusions from this anecdotal exploration.  Except that the human race can be a sad, sorry bunch sometimes...
Posted by Mark Verheiden at 3:19 PM No comments: