What a week! The Swamp Thing Complete Series blu-ray is officially Amazon's #1 choice for things key-word "Swamp Thing" (not exactly the HIGHEST bar, but okay), but since it's ORIGINAL ART FRIDAY, why not celebrate?!

Yes, Original Art Friday, the one day of the week when, if I'm computer and internet adjacent, I offer up a page of (mostly) comic book art dragged up from the depths of my personal nightmare, AKA over-stuffed collection.

And since on top of O.A.F. it's also V.D. (Valentine's Day, dammit), let's go for something wholly appropriate... with this lovely page from the emotionally searing First Love Illustrated #79. Published by Harvey circa 1957, today's tale was written by an unfortunately anonymous but obviously romantic scribe, and drawn by the late, great Bob Powell.


I think the most impressive thing about this page is how Powell only needs 7 panels to take Joan from "new student at the Belmar Dancing School," to first kiss with her "dark and mysterious" teacher Pedro, to being so lovesick over "Senor Arbon" that she's considering leaving with him for Central America (!) on a dancing tour! Aside from the intimation that Joan must have been living a mighty unfulfilled life pre-Belmar, she also must have been one hell of a student to go from novice to professional in three panels. But when young(ish) lovers are "dancing on clouds" to a "glorious symphony of love"... well, I guess she was driven. As for Senor Arbon's dark and mysterious motivations... well, you'll need the rest of the story for that, and I don't have it!

Artist Bob Powell was one of the better craftsmen back in the day, enjoying a career that spanned the golden age of comics into Marvel in the 1960's. He was perhaps best known for Sheena of the Jungle and Cave Girl, which highlighted his sensual, clean illustration style. Here, with First Love, I really appreciate his sharp line and ability to convey emotion through body language. It's just nice, solid work, and designed to be colored (which might explain Joan's bee-sting lips, which I'll bet were a fulsome shade of red in the printed comic).

Personally, I hope Joan followed Pedro to Central America and together they embarked on a fabulous world tour, dancing so gloriously that elderly audiences still remember the night they entered a "new and magical world, where lovers waltzed on clouds." Because I can imagine a lot of OTHER less seemly outcomes, none of which are appropriate to explore on this lovely V.D. (Valentine's Day!)... 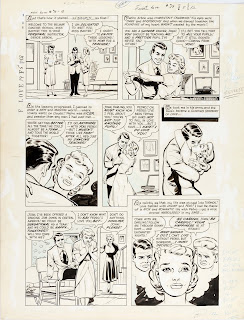 Posted by Mark Verheiden at 9:03 AM