So for Thanksgiving we parked it on the couch and watched a couple hours worth of "Town Called Panic" stop motion animation shorts, which are surreal, hilarious, ridiculous and just generally awesome... but, if I may be allowed, that was Thursday. And this is ORIGINAL ART FRIDAY, the one day of the week where I share a piece of (mostly) comic book art yanked from the MV archives.

Today, in honor of Black Friday, a shopping holiday which I assiduously do not celebrate, here's a classic page from EC Comics and the Haunt of Fear #20, released way back from Summer 1953. Say hello to "Thump Fun" by the always amazing "Ghastly" Graham Ingels. An adaptation(ish) of Poe's Tell Tale Heart, it's a grisly tale of a murderer driven mad by the beat of his victim's dead heart, with a customary EC twist.


Ingels' work is drenched in atmosphere, making him perfect for these semi-Gothic tales of revenge and murder and monsters and death. His striking ink work was sometimes buried under the not-great comic book color of the day, but the power of the art still shone through. Unfortunately, when EC Comics were mostly swept away (with the ultimate exception of Mad, which went to magazine format) by a wave of moralizing, crusading idiots called Senators who blamed horror and crime comics for ruining America's youth, Ingels lost a venue for his particularly eerie horror illustration and eventually left the field.

But the work lives on! "Thump Fun" is included in multiple EC reprints, including a black and white version in the still-in-print Fantagraphics Ingels book "Sucker Bait." I personally prefer the black and white reprints when it comes to Ingels (or most of the other EC artists), after I got spoiled by a series of fancy, large size box sets with stories all pulled from the the original art, produced by Russ Cochran in the 80's and 90's. IDW has also released a couple enormo EC art books which show all the incredible detail of these great pages. And Dark Horse is reissuing everything yet again, in color, in a series of hardcovers.

Which just goes to show, EC will never die... even if poor Marvin does... 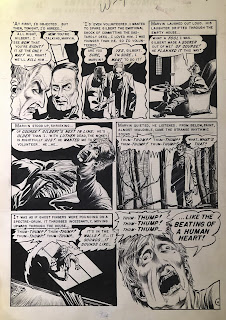 Posted by Mark Verheiden at 9:02 AM