Whiplash! The Movie, Not The Song Or Auto-Related Injury!

Finally catching up to my screener collection, and since the studios weren't kind enough to send out John Wick for our amusement (what?  They don't see "Oscar" written all over that one?) I decided to give Whiplash a spin.  As a casual drummer myself (extremely casual!), I was intrigued by the subject matter.  And as a JK Simmons fan, I was intrigued to see him tackle an intriguing character.  And intriguing he is!  Simmons plays Terrance Fletcher, a good hearted music teacher who... oh wait, that was Richard Dreyfuss in Mister Holland's Opus.  In Whiplash, Simmons plays a musical sociopath who plays brutal head games as he pits his students against one another and ultimately against him.

Miles Teller plays Andrew, a determined young jazz drummer who is taken under Fletcher's vulture-like wing.  Needless to say, the fur flies, along with a chair and other objects, as Fletcher drives Andrew toward "Charlie Parker"-like perfection.  Fletcher lights a fuse under Andrew, but then things take an unexpected turn.

What I really liked about Whiplash was that I really had no idea where it was going, and was surprised (in a good way) by the plot twists and turns.  Until...

So toward the end of Whiplash, both Fletcher and Andrew have been fired/expelled from the music school and are drifting down alternate paths.  When Andrew accidentally comes across Fletcher playing a jazz gig at a NYC bar, they talk, seem to patch things up, then Fletcher invites his nominal prodigy to play with Fletcher's band of professional musicians at a "JVC competition."  Fletcher raises the stakes as Andrew arrives, warning his (professional) band that record labels and talent scouts are in the audience, but when they hit the stage, Andrew discovers he's been set up.  Fletcher calls for a song that Andrew doesn't know, fails to provide even charts, and Andrew goes down in flames. (That's not where the movie ends, but I'll save SOMETHING for those folks who ignored my spoiler warning and read on anyway).

So here's my question.  Yes, I get that Fletcher rightfully blamed Andrew for getting fired, and that he might be the sort who would seek "revenge."  But would a guy this crazy-compulsive about making perfect music really throw the rest of his professional musicians under the bus to screw over his ex-student?  During an actual, live, competitive show?  Wouldn't the other professional musicians (not students, remember) want to take Fletcher's head off for sending them out with an unprepared drummer who ruins their set? I mean, diabolical is one thing, but self-immolation is another.

Suffice to say things "work out" to some extent, but it's interesting what's a bump for some is a feature for others....
Posted by Mark Verheiden at 4:21 PM No comments:

"Back in the day", before computers and the internet and websites and (f this, I'm feeling old), there were these curious publications known as "fanzines."  Which were pretty much what they sound like, amateur or semi-professional magazines written and published by "fans" of pick-the-genre.  In my world, there were all sorts of fan magazines dedicated to comics, science fiction and movies.  Why, I even published one myself, a mimeographed movie-related 'zine called "The Big Screen."  When I finally gave up the publishing ghost I had close to 100 subscribers, but it was all too much for a high school student with limited funds...

Anyhow, most of these small publications are long gone, but there are still a few out there that have the glorious fanzine feel.  I especially like Video Watchdog (nearing issue #200!), Shock Cinema and a more recent endeavor called "Monster." Available through Amazon and (I suspect, tho I may be wrong!) published using print-by-demand technology, Monster has kept a rigorous monthly schedule, with issue #12 just released.  Basically, if you're into oddball/obscure horror or science fiction, Monster is bound to have something for you.  With articles by experts like Stephen Bissette and editor Tim Paxton, it's a great read.  You have any interest in the world, go to Amazon and check out the detailed contents.  And support these guys so I can selfishly read more! 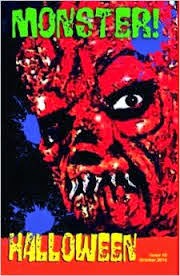 Crashmobile! I'm Not The Only One Who Likes Them!

I love Crashmobiles.  And is there are a more forgotten figure in American pop culture than Art Linkletter?  How does this connect?  Is Mark finally (?) losing his mind?

I'll let history be the judge of my mental acuity, but re: Linkletter --for a time Art was the "kids" guy, most famous for "Art Linkletter's House Party" and "Kids Say The Darnedest Things." (He also lived to the ripe age of 98 and passed away in 2010.)  Anyhow, Art also liked exploding car toys.  Here's a cool poster of Linkletter pimping, I mean, selling the wondrous Crashmobile.  As seen on TV!! 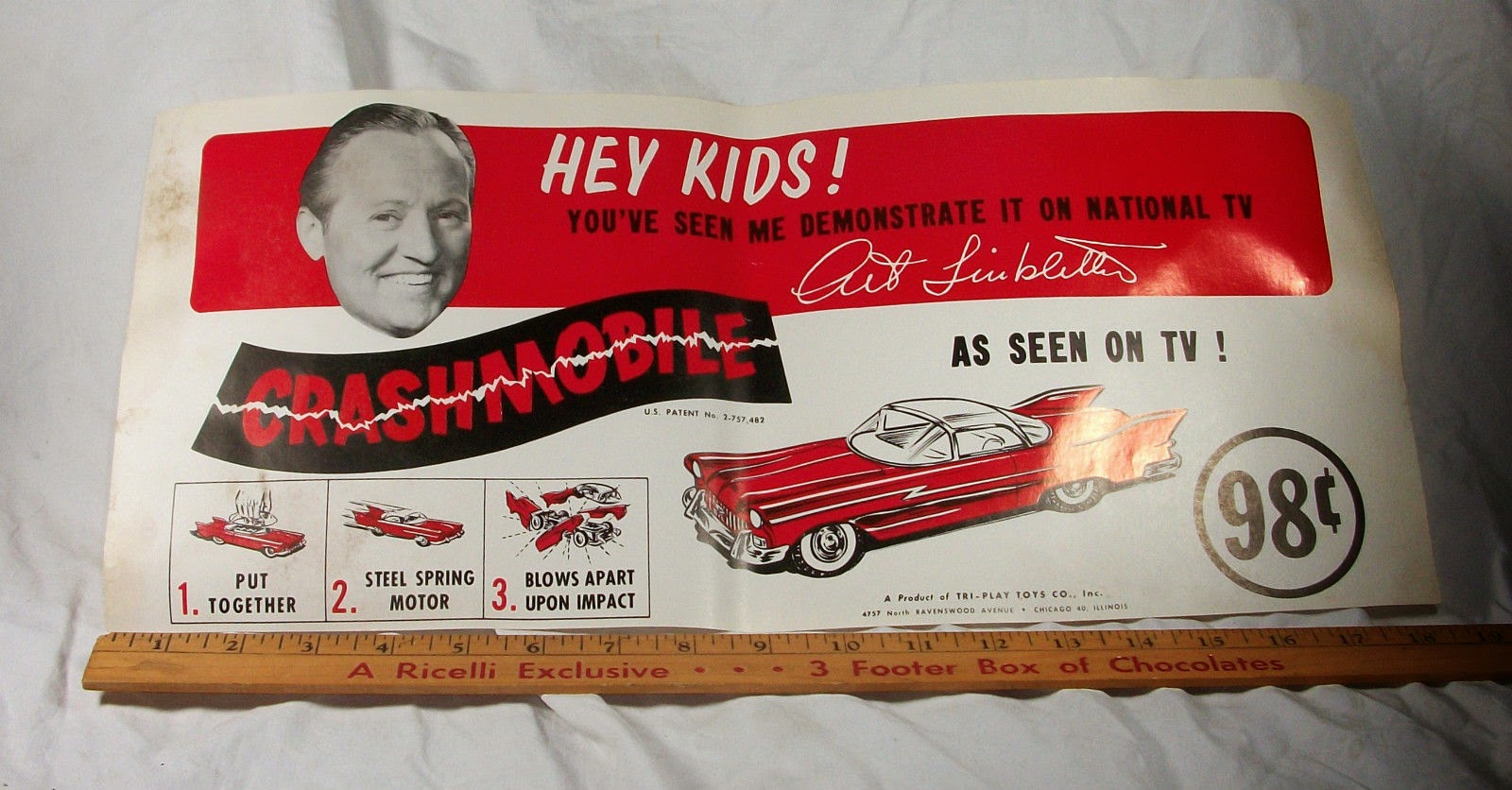 Posted by Mark Verheiden at 2:55 PM No comments:

No, I'm not IN my briefs (well, actually I am, but you don't need that mind-picture)... some of the latest comics related stuff that's piqued my interest:

THE COMPLETE JUNIOR AND SUNNY by Al Feldstein
There are obscure comics, and then there are OBSCURE.  That I lived to see the day when a publisher like IDW would reissue the entire run of future Mad Magazine editor Al Feldstein's sexy comics from the early 50's astounds me.  But I did.  And I am astounded.  This big, 400 page full-color volume may strike some as overkill, but given the price of these books on the collector's market, $50 is a steal.  So, what makes this stuff worth the deluxe reprint treatment?  Don't look at the stories, which are dull "inspired by Archie" teen junk.  What makes this stuff "raise the ol' eyebrow" is the ridiculously detailed fetish art by Feldstein. Specifically, the dude liked drawing lady's breasts.  Feldstein took pains to delineate thrusting, bursting-from-the-fabric breasts on every female character.  And I mean every female character, not just the cute Betty and Veronica surrogates, but also matronly "mom", elderly teachers -- if the character's female, chances are her sad chest is just aching to explode from some ridiculously tight blouse or sweater. The end result is frankly quite surreal, since none of the stories ever actually touch on the insanely overt sexuality.  This book also features a nice text piece on Fox Comics (where this stuff originally appeared) and various rarities, like sketches.  And I'm still astounded. 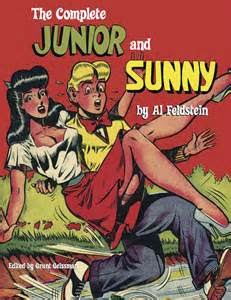 BLACKLIGHT - THE WORLD OF LB COLE
This may be even MORE obscure.  Cole was a comics publisher/artist/editor from 40's-on whose claim to fame lies with his crazy dayglo, pop-art comic book covers.  Cole was a fairly talented artist, but his real talent lay in his great design sense.  This guy knew how to catch a reader's eye.  Since Cole mostly worked for smaller companies, they needed something to differentiate them from the more mainstream DC and Timely/Atlas/Marvel books.  He certainly managed that! At 270 full color pages and even LARGER than the Junior/Sunny book, this is more Cole than most people need, but it is a comprehensive and well produced volume. 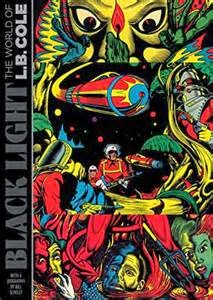 CREEPING DEATH FROM NEPTUNE - Basil Wolverton Vol 1.
There are several Wolverton art collections out there, but this is the first volume of a set that intends to explore his entire career from a biographical point of view.  Most collectors know Wolverton for his really bizarre pen-and-ink "portraits" (his drawing of "Lena The Hyena" made the cover of Mad magazine) but he was also a great comics artist, radio personality (!) and etc.  This is a remarkably detailed biography of the man's early years, including rare photos of Basil visiting the set of Buster Keaton's "The General" (it shot in Oregon, near Wolverton's hometown).  I confess a personal obsession with Wolverton, who lived near where I grew up... when my Uncle ran into Wolverton and told him that his nephew was a comics nuts, Basil was kind enough to call this very young fellow and talk... well, local wrestling, but also comics. Nice guy and a nice book. 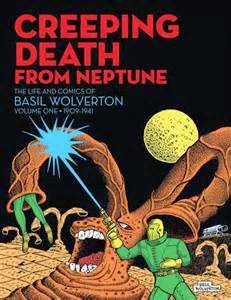 Posted by Mark Verheiden at 9:30 AM No comments: